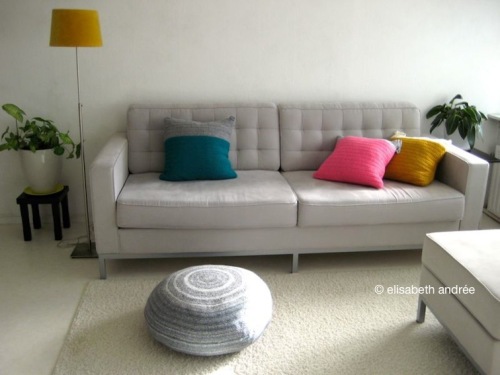 in an earlier post about the cover i had written that i had to work with two shades of a variegated yarn, but the effect is not bad at all. the circles were created themselves while crocheting.

i have this pouf made in the same way as the yellow floor cushion, the difference is that when i was almost at the side of the pouf, i stopped increasing the number of stitches.

both parts of the pouf cover i hooked together with the wrong sides facing each other and alternately crocheted a h dc into the edge of one half and then one h dc in the other half. the last part of securing the seam was tricky because the pouf is too large to hold in a handy way and crochet at the same time. well it worked – with a lot of moaning and grumbling i must admit. if i want to wash the cover, i have to detach a part of the seam and reconnecting when washed and dried.

what you think of the end result?

for the tutorial for the yellow floor cusion see:

see you next time! 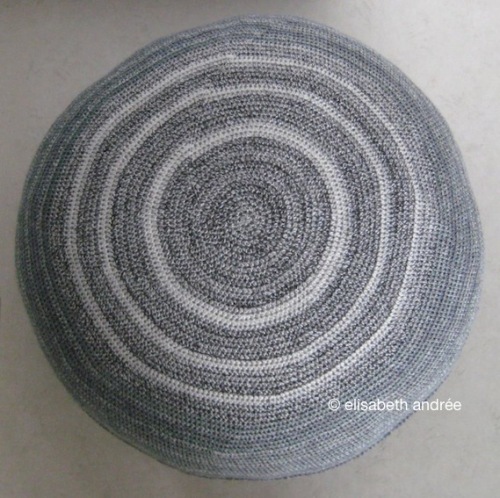 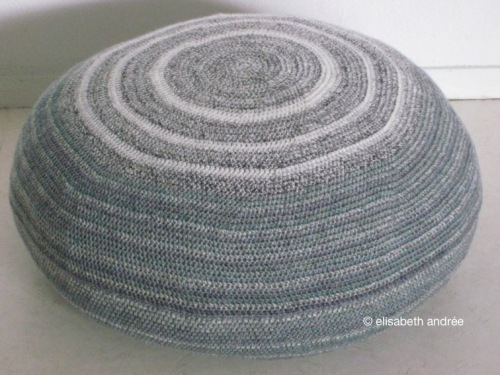 my name is elisabeth andrée.
if you like to read a little more about me
just click on the picture.

thanks for visiting my blog!

unless stated otherwise all designs, tutorials, images and words on this blog are mine and the copyright belongs to me elisabeth andrée©. if you like to post or pin a picture, always link back to the specific post. tutorial content may not be rewritten and/or distributed without my written permission, but you can sell any item you have made based on my patterns/tutorials. thank you for understanding!

about ads on my blog

while visiting my blog you may see an advertisement. these ads are not mine but from wordpress. more info here: http://en.wordpress.com/about-these-ads/